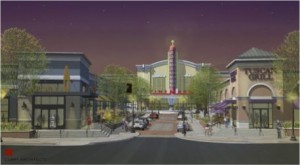 Towson has been looking a bit brighter lately, and it’s not just because it’s spring.

In preparation for Towson Square—a pedestrian-friendly entertainment complex opening this summer—the county reported that it has upgraded every street light in downtown Towson.

Streetlights were replaced in areas bounded by Joppa Road and Washington, Burke and Virginia avenues, according to a statement from Baltimore County.

“This has been a big focus for our public safety efforts,” said Baltimore County Councilman David Marks, whose district includes Towson.

In addition, the The Towson Chamber of Commerce is encouraging business owners to improve their lighting with brighter, more energy efficient fixtures, the county’s statement said.

The chamber’s executive director told the Towson Times that there was concern about business patrons and Towson University students walking on poorly lit side streets.

“We want to be sure people can easily and safely navigate downtown by car, by foot, by bicycle, bus or taxi cab,” Kamenetz said.

To that end, the county will be installing new sidewalks with brick bands along Delaware and Shealy Avenues this spring, according to the statement.

In addition, decorative plantings and new sidewalks will be installed on the east side of York Road between Chesapeake and Pennsylvania avenues, the county reported.

Towson Square will include several new restaurants and 15 Cinemark movie screens atop an 850-space parking garage.

The project website indicates it is scheduled to open this summer, and the developers did not immediately respond to a request for a more specific timeframe. According to WYPR, the complex is opening Memorial Day weekend.

“…Towson is becoming the place to go on a Saturday night—or any night,” Kamenetz said.